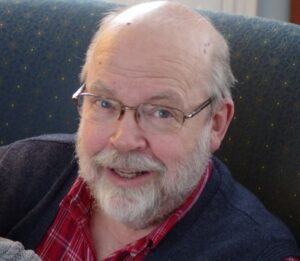 Ron Myhr is a long-time grower of gesneriads. He founded the Toronto Gesneriad Society in about 1978 and has frequently been active in the affairs of The Gesneriad Society. In the 1990s he started the Gesneriad Reference Web, which became a Gesneriad Society website several years ago. He remains the webmaster for the GRW, leading a team which provides the best source of information on the Gesneriaceae in the world. While not a frequent exhibitor in flower shows, Ron DID win Best In Show at the 2016 convention. He knows it was a fluke of timing, never likely to be repeated – a nice plant in peak condition at just the right time.

Ron’s talk in the “Intro” series at this convention will focus on the gesneriads suitable for beginners, whether growing indoors on windowsills or under lights, or outdoors on sheltered decks or in the garden. He will also highlight some of the more exotic species and cultivars to which new growers might reasonably aspire. 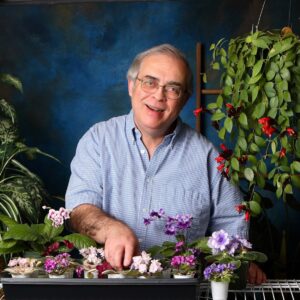 Mel Grice has been growing gesneriads for over 50 years and is the current President of The Gesneriad Society. He is the editor of Gleanings and Appraisal and the seed fund distribution person for the Gesneriad Hybridizers Association. He also authors “The Family Portrait” column in the African Violet Magazine (AVM) about gesneriads. Mel was a former librarian and loves to research information about gesneriads in order to make them happy.

Mel’s talk will share ideas for new growers to find information about gesneriads, get connected with knowledgeable people, obtain plants, and increase their collections. 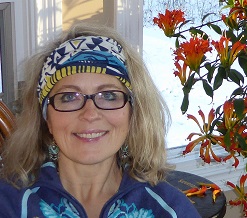 Terri Vicenzi has taken the gesneriad world by storm over the past few years. Although a long-time African violet grower she is a latecomer to the broader Gesneriaceae and exhibited at her first convention only two years ago. But what an exhibition it was!

It was about ten years ago that Terri took a serious interest in cultivation of Streptocarpus and found that she could grow them better than she could grow her African violets. It was just at the time that many exotically beautiful streptocarpus hybrids were coming out of Eastern Europe, and it was exciting to grow these magnificent plants. It was through attending her first AVSA convention in 2015 that she became familiar with the broader Gesneriaceae, and she now is partial to Primulina and Smithiantha, in addition to Streptocarpus.

Terri has grown plants all her life, even while obtaining a Ph.D. in biochemistry and working in pharmaceutical development. She is passionate about sharing her love of Streptocarpus and other gesneriads, and is a contributing member to social media gesneriad sites and to AVSA and The Gesneriad Society.

Terri’s program in the virtual convention will focus on Streptocarpus, including her cultivation techniques and her approach to showing them. Of course, there will be many photos of her beautiful plants.

The Gesneriad Society’s Conservation Committee is co-chaired by Stephen Maciejewski and Jeremy Keene, both of whom have been much involved in international conservation activities for the Gesneriaceae.

The annual convention meeting of the Committee will feature a series of presentations on international conservation projects.

In addition to his role as co-chair of the Conservation Committee, Stephen Maciejewski is co-chair of the Student Convention Grant Committee and a co-founder of the Gesneriad Conservation Center of China. He is also a plant explorer, tour guide, nature writer and lecturer who has spoken throughout the United States, Canada, China, Vietnam and Cuba.

Do Van Truong, a botanist from the Vietnam National Museum of Nature in Hanoi, Vietnam, will present a program on the conservation of gesneriads in Vietnam and the future Begonia/Gesneriad Conservation Center of Vietnam (BGCCV). He has led numerous field trips into the wilds of Vietnam and has discovered many new plants.

Fang Wen will present an update on the Gesneriad Conservation Center of China (GCCC). He will report on the many changes at the center, including the creation of the new germplasm unit and the Commission for the Conservation of Gesneriads at the Guangxi Institute of Botany (GXIB/GCCC). He will also report on a new branch of the GCCC (Hunan Botanical Garden). Finally, he will talk about future seed production at the GCCC. 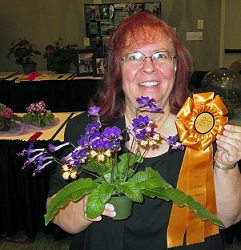 Dale Martens, well known for hybridizing gesneriads, is the “Back to Basics” columnist for the Gesneriads journal. She was the long-time editor of the Gesneriad Hybridizers Association journal CrossWords, and is a frequent and successful exhibitor at flower shows. Over three decades, due to moving from state to state, she has grown gesneriads in quite a variety of conditions including hanging baskets under an apricot tree in the very low humidity city of Los Angeles.

Dale’s talk in the “Intro” series, “Gesneriads – Here, There and Everywhere”, will focus on how growers around the world grow various gesneriads, such as in natural window light, greenhouses, shade houses, artificial light and in the ground.

The Gesneriad Hybridizers Association’s 2021 program features beautiful photos of exciting gesneriad hybrids from around the world. The GHA program’s presenter, Dale Martens, is the Chairperson of GHA. For over 3 decades, Dale has introduced to the world a variety of new hybrids including Kohleria, Sinningia, Streptocarpus, Primulina, ×Achimenantha, Smithiantha, African violets, and Episcia.

Streptocarpus ‘Texas Hot Chili’ and all the variegated streptocarpus hybrids with “Ice” or “Iced” as well as “Polar” as alpha names are among her hybrids. During the last Gesneriad Society convention, she won Horticultural Sweepstakes for the most blue ribbons, and several of the entries were her own hybrids. GHA members receive a PDF newsletter called CrossWords three times a year for a low annual cost. With each informative CrossWords issue featuring hybridizers from around the world and their newest creations, the members are able to choose five packets of seeds for free. 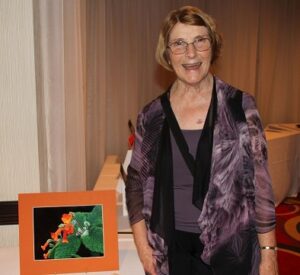 Ruth Coulson is a long-time Australian grower and hybridizer of outstanding gesneriads. She began growing plants like Aeschynanthus, Columnea, Achimenes and Florist Gloxinias in the 1970s, without knowing that they were all called gesneriads. They were just more pretty plants to add to her burgeoning collection.

A few years later she developed a passion for Saintpaulia, and that subsequently introduced her to the world of gesneriads in all their glory, and to the friendship of many other growers of these plants. Soon she had gesneriads everywhere, in her shade house and in her home, and began successfully exhibiting her plants.

Her particular hybridizing interests were the mid-size Sinningias, but she tried her hand at many others. She achieved some spectacular successes. Her current growing focuses on Episcia which she grows indoors.

Ruth’s presentation will focus on the challenges and pleasures of growing outstanding gesneriads in Australia, and on the people and plants she has encountered through her long and successful engagement with the Gesneriaceae. David Middleton is a professional botanist with a long and productive career in Gesneriaceae research, focused on the genera and species in South-east Asia and in the Malaysian archipelago. He has collected and described several new genera such as Chayamaritia, Rachunia, Somrania and Tribounia, and many new species. A particular interest has been the genus Aeschynanthus, and he is perhaps the world authority on this genus.

David received his Ph.D. in 1989 from Aberdeen University in Scotland, and worked at Trinity College Dublin in Ireland, the National Herbarium of the Netherlands in Leiden, and at the Harvard University Herbaria in Cambridge, Massachusetts. From 2004 he worked on Gesneriaceae at the Royal Botanic Garden Edinburgh in Scotland, with a particular focus on Aeschynanthus and on the broader Gesneriaceae for the Flora of Thailand.

In 2014 he was appointed as Director of Research and Conservation in the Singapore Botanic Gardens where he continues his research on Asian Gesneriaceae in collaboration with other researchers in the region and farther afield. He is the editor of The Gardens’ Bulletin, Singapore and The Flora of Singapore, and serves on the Boards of Thai Forest Bulletin (Botany), Flora of Thailand and Flora Malesiana.

David’s talk will provide an overview of the Gesneriaceae of South-east Asia and the Malay Archipelago, with particular focus on the plants he has seen and photographed in the field. He promises many beautiful pictures. 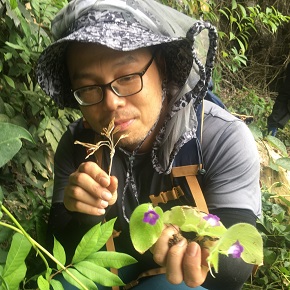 Dr. Wen was instrumental in the establishment of the GCCC, and in developing a partnership between the GCCC and The Gesneriad Society. His focus has been on documenting Chinese gesneriads, assessing conservation status of species and working to preserve habitat and protect endangered species.

As part of his work, Dr. Wen has engaged in numerous exploratory and collection field trips. He has documented many gesneriads in their natural habitat, photographing them and collecting plant material and seeds. His photographs of gesneriads in the field are remarkable, illustrating the great beauty of these plants.

As Research Director at Guilin Botanical Gardens, Dr. Wen has been responsible for growing many of the species collected from the wild, ensuring their continued survival even as natural habitats disappear. Many of the plants that he and his associates have grown have matured into remarkable specimens and have received numerous awards in the virtual flower show of The Gesneriad Society.

Dr. Wen’s presentation at the 2021 virtual convention will focus on the Gesneriads of China, a virtually unlimited topic – there are a very great many Chinese gesneriads! He will illustrate the often-spectacular natural habitats of the Chinese Gesneriaceae, as well as the beauty of individual plants in the wild and in cultivation. His talk will also touch on the conservation efforts needed to preserve gesneriad habitat and the actions of the GCCC and other institutions in China in support of this preservation. 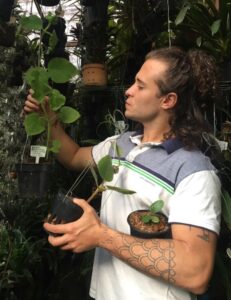 Nathan Gazineu is a young botanical collector in Brazil, with more than 1700 plants in cultivation. He received the collection from a noted botanist who had collected many specimens for the first time, and all the plants have systematic information about their collection data, habitat and cultural requirements. Nathan has a particular interest in the Gesneriaceae, among other plant families, and is always seeking to increase his collection and his knowledge.

Nathan’s particular interest is the Atlantic rainforest in Rio de Janeiro state, as well as in adjacent areas to the south and west. His extensive gesneriad collection includes many species collected from these areas, with special emphasis on Sinningia and Nematanthus.

The focus of Nathan’s presentation will be on his collection, on photos of beautiful plants in their natural habitats and on discussion of the conservation status of many of these rare and beautiful species. 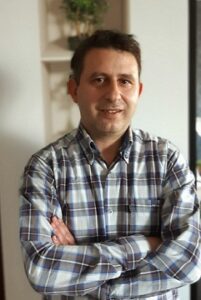 Serge Saliba is a Romanian hybridizer whose particular interest is in the rhizomatous gesneriads, especially Achimenes and xAchimenantha. He has made use of some of the most advanced hybridizing techniques to produce the spectacularly beautiful hybrids that have been distributed around the world.

He has also begun working to create miniatures in Sinningia and Kohleria, with stunning success. While not yet widely distributed, these plants have the potential to upend the world of gesneriad hybrids!

Serge was trained and received a master’s degree in Human Physiology. He has a long resume as a manager and CEO of companies, and has worked around the world, including for a time in the United States. More recently he has applied his business acumen to building a horticulture business centered around his gesneriad hybrids.

Register for the 2021 Virtual Convention now!