Members of the Board of Directors elect officers (to serve two-year terms) with elections held at a Board Meeting each year at convention. The current officers (and terms) are:

Board of Directors (voting)

The Board consists of 21 directors who serve staggered terms. The membership elects seven directors to serve three-year terms with elections held at the Annual Membership Meeting each year at convention. The current directors are:

Advisory Board of Past Presidents (non-voting) 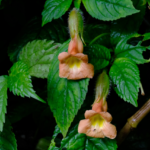 Each time you make a purchase through Amazon Smile a donation will be made to the Gesneriad Society - by Amazon, at no extra cost to you!    The easy way to donate.

Membership in The Gesneriad Society has numerous benefits, chief among them being the quarterly journal, Gesneriads. Read more about the benefits of being a member.

Take advantage of all the members area has to offer. You can:

Login to the members area