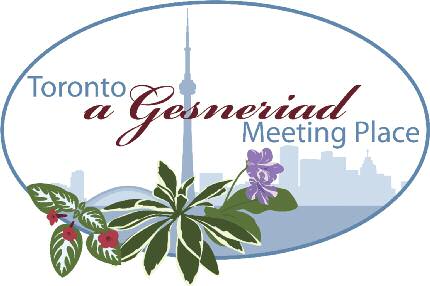 Convention registrants from 6 provinces in Canada, 23 states in the USA, and 6 other countries gathered together at the Hyatt Regency Hotel in downtown Toronto. The hotel’s location in the Entertainment District provided easy walking to live theatre, concert halls, cinemas, and more attractions and restaurants than anyone could visit during a short stay. Those who came early celebrated Canada Day with free activities all over town including fireworks in the evening.

Convention opened with the Board of Directors meeting on Tuesday morning followed by a group trip to the historic home and gardens of the Parkwood Estate. Back at the hotel that evening, convention attendees mingled at the opening dinner and the host chapter social. On Wednesday, a record number of 78 registrants attended Judging School. Most everyone then enjoyed the always popular GHA meeting and program. At the conservation meeting, Stephen Maciejewski reported on progress at the Gesneriad Conservation Center of China and showed images of his trip there earlier this year.

Later in the week there were other programs as well as mini-lectures and poster presentations from the five students who had been awarded grants by the Society to attend convention. Ron Myhr, founder and maintainer of the Internet site The Gesneriad Reference Web, not only was Speakers Chairperson but also presented a mini-program on the Montreal Botanical Garden and its gesneriad collection. The featured lectures were “Species Streptocarpus” by Bob and Dee Stewart; “Approaching Perfection: Growing and Showing Gesneriads” by Bill Price; “The Natural History of Pollinators, Pouches and Upside-down Flowers in the Gesneriaceae” by John L. Clark; and “Morphological Diversity vs. Molecular Data in Paliavana, Sinningia, and Vanhouttea” by Alain Chautems.

The many offerings in the plant sales room provided attendees and visitors an opportunity to buy whatever they desired. If they couldn’t find what they wanted in the plant sales room, there were some exciting new plants/cuttings/seeds offered in the silent and live auctions, with all the proceeds going to the Elvin McDonald Research Endowment Fund. The Phyto Inspectors were kept busy all day on Saturday providing the required paperwork to allow the newly acquired gesneriad material to leave Canada and find new homes around the world.

The convention was brought to a close on Saturday night with a delicious dinner in the revolving 360 Restaurant atop the CN Tower, 1151 feet above Toronto. All too soon it was time to pack up and say goodbye to friends old and new. Toronto was truly a Gesneriad Meeting Place! We hope to see most everyone again next year in Nashville, Tennessee, USA.