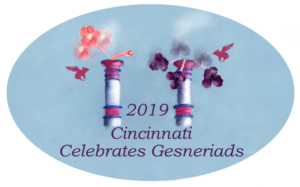 Members of The Gesneriad Society hosted the 63rd Annual Convention at the Hilton Cincinnati Netherland Plaza Hotel. This was the first Gesneriad Society Convention held in an area with no local chapter. Convention Co-Chairs Mel Grice and Paul Susi and their well-organized team welcomed the 188 convention registrants, including 51 first-time attendees.

On Monday, registrants enjoyed a trip to Spring Grove Cemetery and Arboretum, lunch in the Over-the-Rhine neighborhood, a tour of Rookwood Pottery, and a visit to the Ohio Riverfront area. The Tuesday trip included a trip to Eden Park, the Krohn Conservatory, and the Cincinnati Art Museum. The Society’s Board of Directors met in the afternoon, after which convention attendees socialized at the opening dinner.

The Tuesday evening Conservation Committee program was Co-Chaired by Stephen Maciejewski and Jeremy Keene with other presenters: Zi-Bing Xin shared “Progress at the GCCC in 2018,” the publication of new species, and preparations for the 2020 Flower Show in China; Hong Xin provided an update on his research in China; Jeremy Keene discussed his recent research trips to Panama as well as provided an update on tissue culture of rare plants at Glenville State College.

Wednesday included morning and afternoon judging school sessions and tests, as well as a Social Media Discussion. The first evening event was the popular Gesneriad Hybridizers Association meeting and program with Dale Martens showing photos and discussing the use of gesneriad species in hybridizing adventures. The Chapters and Affiliates Meeting with Karyn Cichocki wrapped up the evening.

The featured lectures during the week were “Lighting… The Basics and Facts about LEDs” by Bruce Williams (Canada); “Gesneriad Hunting in Cuba” by Stephen Maciejewski (Pennsylvania); “Gesneriads on the Go” by B.J. Ohme (Nebraska); and “Dibleys at the 2018 Chelsea Flower Show: 200 Years of Streptocarpus Cultivation” by Lynne Dibley (North Wales, UK). A mini-program was presented by Zi-Bing Xin (China) on Petrocodon, and three informal growing discussions were also held during the week.

Mini-programs were presented by those who received this year’s Student Convention Grants. Three were given by students from the Lawrenceville School in New Jersey (participants in the 2019 Ecuador expedition led by Dr. John L. Clark): Simon Cull presented “The Biodiversity of the Cordillera del Cóndor;” Samika Hariharan presented a video blog of the Lawrenceville in Ecuador Program; Nikita Coppisetti presented “A New Species of Diastema from Eastern Peru.” Wenjing Xu from Anhui University in China presented “The Rare Elves of Southeast China – Section Heteroboea (Didymocarpus).”

Thursday afternoon and evening were dedicated to processing entries for the flower show and the final preparations and opening of plant sales for convention registrants. Fireworks could be seen around the area, but plant sales provided the best eye-candy for convention attendees that evening.

At the Society’s Annual Meeting on Thursday, well-deserved Awards of Appreciation were presented to Karyn Cichocki and Lynne Dibley.

After judging on Friday morning, the flower show opened to display the 329 high-quality entries from 58 exhibitors, including a record 16 first-time exhibitors at a convention show. Sweepstakes in Horticulture was earned by Dale Martens with 9 blue ribbons; Sweepstakes in Artistic was earned by Karyn Cichocki with 4 blue ribbons. Best in Horticulture was awarded to Bill Price for his Collection of Primulina species; Best in Artistic was awarded to Karyn Cichocki for her arrangement “Celebrate with Fireworks;” Best in Arts was awarded to Stephen Maciejewski for his color print of Gesneria libanensis growing in a natural habitat.

Thank you to all the show exhibitors for participating and congratulations to all the winners who were recognized on Friday night at the Awards Banquet. A list of all blue-ribbon and special award entries will soon be available on this website along with images of the flower show and other convention activities and attendees.

Saturday’s program included lectures, lunch, and the live auction followed by the auction settlement and the breakdown of plant sales and the show. The convention was brought to a close that evening with a dinner cruise on a restored paddle-wheel riverboat where attendees met to once again socialize, re-live this wonderful convention, and say their goodbyes until next year. The spectacular sunset was a fitting ending.

Thank you again to the chairpersons, workers, volunteers, those who provided sale and auction items, those who entered or helped with the flower show, and all who helped in any way to make the 2019 Convention such a success. The Cincinnati Convention may be over, but wonderful memories remain.

In 2020 we hope to see old friends and new in downtown St. Petersburg, Florida, from June 30 to July 4 at the Hilton Bayfront St. Petersburg to enjoy “Gesneriad Treasures in the Sunshine State.”