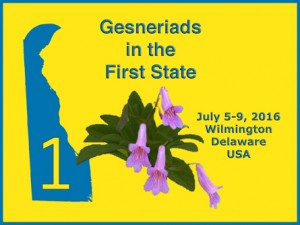 Gesneriads in the First State

The Delaware African Violet and Gesneriad Society hosted the Society’s 60th Annual Convention in Wilmington, Delaware, from July 5-9, 2016, at the DoubleTree Wilmington Downtown Hotel. The local chapter members, organized by Mary Schaeffer and her team, welcomed the 160 convention registrants, including 20 first-time attendees.

Almost 50 convention registrants enjoyed the all-day pre-convention trip on Monday to Longwood Gardens in Kennett Square, Pennsylvania. That evening, the Fourth of July, a meet-and-greet social was held in the President’s Suite for all attendees.

The Tuesday half-day trips (morning and afternoon) were tours of nearby Winterthur Gardens. The Society’s Board of Directors met in the afternoon, after which convention attendees mingled at the opening dinner. The Conservation Committee program followed with short presentations by David Neill “In situ and ex situ conservation of  Gesneriaceae in Ecuador;” Wen Fang “Gesneriad Conservation Center of China 2015-16 Update;” Hong Xin “Hunting Gesneriads in the Dark;” and Wen Fang “The Need for Gesneriad Conservation in Thailand.”  The evening ended with a social media presentation highlighting the webinar series with Dale Martens, Mary Schaeffer, and Paul Susi leading the discussion.

Wednesday brought judging school sessions; a mini-program “Growing Humidity-Loving Gesneriads in Florida” by Nancy Kast; the Gesneriad Hybridizers Association meeting and program with Dale Martens celebrating the 40-year anniversary of the GHA; and the Chapters and Affiliates Meeting.  New at this convention were three informal open discussion periods where attendees could leisurely sit for an hour and just talk plants amongst themselves.

The featured lectures during the week were “Plant Explorers in Ecuador, the Aftermath and Conservation Efforts” by David Neill (Ecuador); “The Joys of Growing Miniature Sinningias” by Betsy Gottshall (Pennsylvania); “Growing Streptocarpus Hybrids to Their Full Potential” by Karen Allen (Virginia); and “Growing Saintpaulia Species – Mimicking Mother Nature” by Jeff Smith (Indiana). A mini-program was presented by Marcela Mora (Missouri) on taxonomic changes in the genus Paradrymonia and some species previously considered part of Chrysothemis and Nautilocalyx.

Mini-programs were given by students who received 2017 Convention Grants: Hong Xin (Anhui Normal University, China) presented a program on the distribution of favorable habitats for Primulina; and Megan Kucker and Claire Garcia (Lawrenceville School, New Jersey) presented their experiences on a 2016 research expedition (led by Dr. John L. Clark) to a recently established reserve along the Ecuadorian Andes.

The flower show featured 287 high-quality entries from 49 exhibitors – one of our larger shows in the recent past.  A list of all winning entries is now available (click on the first link on the side-bar), and flower show images will be there soon.  Other images of the convention activities and attendees will also be added.

Whether you were unable to attend convention this year or would like to re-live the experience, you will be able to order the 2016 Convention DVD (available later in the year). This DVD will include PowerPoint presentations of the flower show and all of the programs and lectures, along with images of the people and places that were a part of Convention 2016, as well as 32 videos and interviews with Peter Shalit.

Celebrations were a big part of this year’s convention. A special presentation was prepared by Anton Weber (Austria) and presented by Ron Myhr after the annual meeting on Thursday. The program covered the life and scientific work of Conrad Gessner and had been prepared especially for our 500-year celebration of Gessner’s birth this year.

The convention was brought to a close on Saturday night with dinner at Timothy’s on the Riverfront including more festivities … this time with a cake celebrating the 200-year anniversary of the plant family Gesneriaceae. Jim Roberts (Maryland) completed the evening there with a special program “Hoarding: One Man’s Attempt to Grow It All.”

Our celebrations for this year are over in Wilmington … but in 2017 we hope to see old friends and new at convention from July 4-8 at the Hilton Hotel in downtown Omaha, Nebraska.