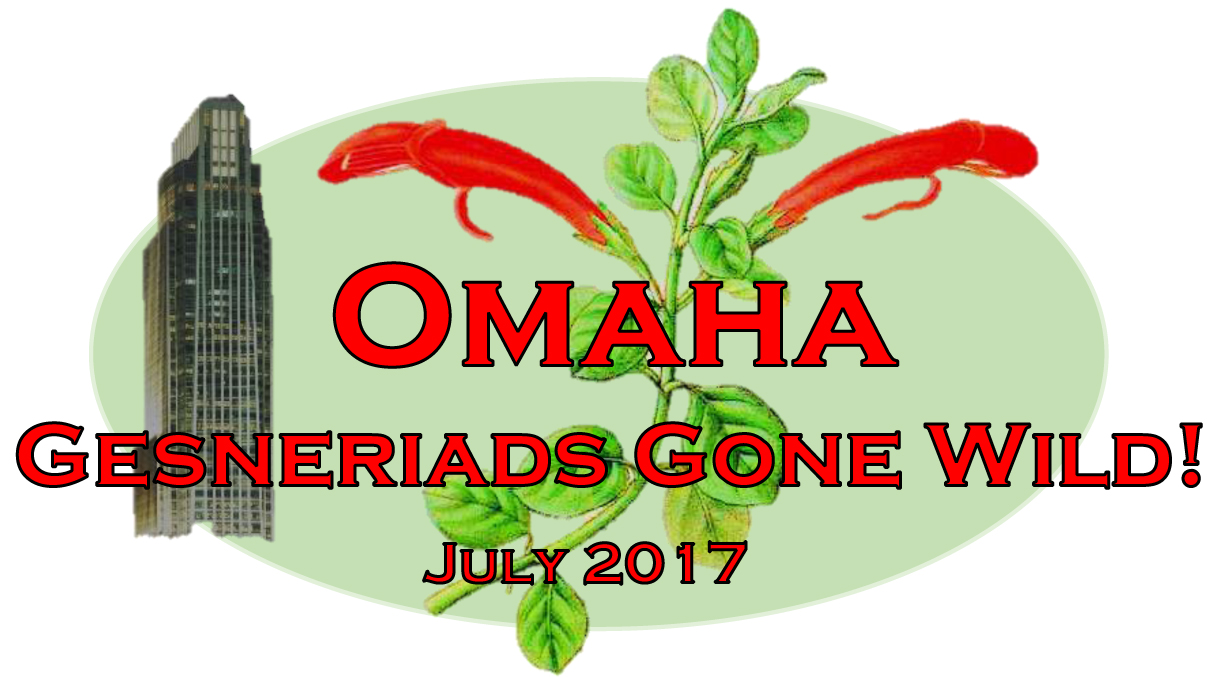 The Omaha African Violet and Gesneriad Society hosted the Gesneriad Society’s 61st Annual Convention – Gesneriads Gone Wild! – at the Hilton Omaha Downtown. The local chapter members, organized by Brandon Erikson, Scott Evans, and Tom Bruning, welcomed the 150 convention registrants, including a record-breaking 48 first-time attendees from 13 states, many of whom volunteered to help with various activities during convention.

On Monday, over 40 convention registrants enjoyed the all-day pre-convention trip to the Henry Doorly Zoo and Aquarium with a picnic lunch. The Tuesday half-day trip was a visit to Lauritzen Gardens with a narrated tram ride garden tour. The Society’s Board of Directors met in the afternoon, after which convention attendees mingled at the opening dinner.

The Tuesday evening program was presented by the Conservation Committee (hosted by Stephen Maciejewski) with additional short presentations by Carolyn Ripps (Brazil conservation updates); Mary Jo Modica (China conservation updates); and Zhi-Jing Qiu (Petrocosmeas and other gesneriad conservation efforts in China).  The evening ended with a Fourth of July social hosted by the local chapter in a suite on the 7th floor of the hotel looking out at the many local fireworks displays lighting up the Omaha sky.

The Chapters and Affiliates meeting closed the day’s activities.

In addition, three informal discussions were held during the week: Growing sinningias (moderated by Alan LaVergne); Growing gesneriads under natural light (moderated by Alcie Maxwell); and What’s bugging your gesneriads (moderated by Paul Johnson). After the Annual Meeting, Society founder Elvin McDonald presented a program “Write me a letter…” how a 13-year-old Oklahoma farm boy began what has become an international fellowship: The Gesneriad Society.  The evening ended with the frenzy of activity at the opening of plant sales.

On Friday afternoon, the flower show opened to display the 207 high-quality entries from 38 exhibitors. A list of all blue-ribbon and special award entries is now available (click on the first link on the side-bar), as well as flower show images (second link). Images of the convention events and attendees can be seen by clicking on the third link.

Saturday’s activities included two more lectures, lunch, and the live auction followed by the breakdown of plant sales, the auction, and the show. The convention was brought to a close that evening with a “Wine Down” at Nosh Restaurant and Wine Lounge just a few blocks from our convention hotel where attendees gathered to once again socialize, re-live this wonderful convention, and say their goodbyes until next year.

Whether you were unable to attend convention this year or you would like to re-live the experience, you will be able to order the 2017 Convention DVD (available later this year). This DVD will include PowerPoint presentations of the flower show and all of the programs and lectures, along with images of the people and places that were a part of Convention 2017, as well as videos and interviews by Peter Shalit.

Thank you again to the Omaha African Violet and Gesneriad Society for hosting this very memorable convention. Our Gesneriads Gone Wild! celebration for this year may be over in Omaha … but in 2018 we hope to see old friends and new at convention from July 3-7 at the Sheraton Hotel and Conference Center in Framingham, Massachusetts.