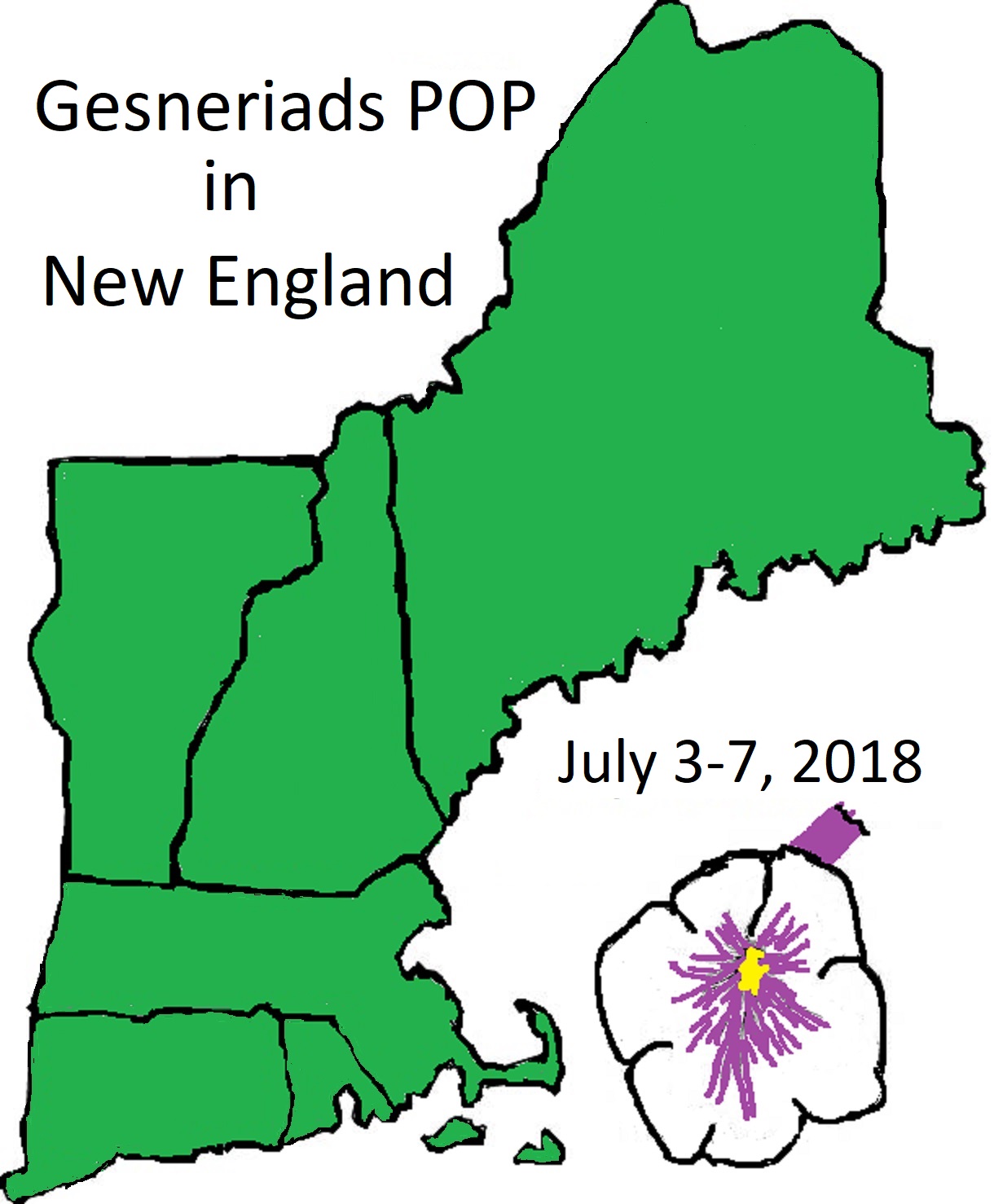 The New England Chapter of The Gesneriad Society hosted the Gesneriad Society’s 62nd Annual Convention – Gesneriads POP in New  England – at the Sheraton Framingham Hotel and Conference Center. The local chapter members, organized by Local Convention Chair Phyllis Savage, welcomed the 157 convention registrants, including over 30 first-time attendees, many of whom volunteered to help with various activities during convention.

On Monday, over 50 convention registrants enjoyed the all-day pre-convention trip to the Garden in the Woods, the Stewarts’ home greenhouses, and Russell’s Garden Center. The Tuesday trips included a visit to Logee’s Greenhouses in Connecticut and/or the Stewarts Greenhouses (for those who missed the trip on Monday). The Society’s Board of Directors met in the afternoon, after which convention attendees mingled at the host chapter’s social and the opening dinner.

The Tuesday evening program was presented by the Conservation Committee (hosted by Stephen Maciejewski) with additional short presentations by Wen Fang with updates about the Gesneriad Conservation Center of China; Carolyn Ripps presenting a program from Mauro Peixoto on the Brazilian conservation project; and Wen Fang also presenting on the biodiversity and conservation of Gesneriaceae in Thailand and Vietnam.

Wednesday included morning and afternoon judging school sessions and a meeting of Chapters and Affiliates. The evening event was the always-popular Gesneriad Hybridizers Association meeting and program with Dale Martens and this year’s guest speaker Dmitry Ozherelyev from Moscow, Russia, who shared images of hybrids of kohlerias, smithianthas, streptocarpus, and other gesneriads from Russia, Ukraine, and the Czech Republic.

The featured lectures during the week were “Exploring for Gesneriads in the Wilds of China” by Stephen Maciejewski (Philadelphia, Pennsylvania); “Water, Soil, and Your Plants” by Bob Stewart (Stow, Massachusetts); “Growing Show Plants” by Dale Martens (Sherrard, Illinois); and “Exploring for Gesneriads in Ecuador” by Jim Roberts & Drew Norris (Marriottsville, Maryland). A mini-program was also presented by Wen Fang on Chinese Gesneriaceae.

Student mini-programs were presented by those who received this year’s Student Convention Grants. Three were given by students from the Lawrenceville School in New Jersey (participants in the 2018 research expedition to Ecuador led by Dr. John L. Clark: Sid Sharma presented a video blog of the Lawrenceville in Ecuador Program; Brandon Li presented a PPT “The Biodiversity of the Cordillera del Cóndor”; Emily Guo presented a PPT “Laboratory- and Field-Based Approaches for Studying Plant Diversity.” Martin Siaw (a PhD student from China) presented “How to Fall in Love with Gesneriads in Ten Days” – a progress report on informing and engaging the Chinese Public on the urgency of protecting China’s gesneriad populations.

In addition, three informal discussions were held during the week: Brandon Erikson moderated an informal growing discussion; Ron Myhr moderated a Q&A session; and Ray Coyle moderated a discussion on propagation.  Thursday included a Social Media discussion “Armchair Gesneriad Travels” featuring the wealth of gesneriad information that can be learned from your computer. The afternoon and evening were then dedicated to entries for the flower show and the opening of plant sales.

After judging on Friday morning, the flower show opened in the afternoon to display the 207 high-quality entries from 42 exhibitors, including a record 5 first-time exhibitors at a convention show, followed by the Awards Banquet and recognition of the winning exhibits. A list of all blue-ribbon and special award entries is now available (click on the first link on the side-bar) as are the Flower Show images. Other images of the convention events and attendees will be there soon.

Saturday’s activities included lectures, lunch, and the live auction followed by the auction settlement and the breakdown of plant sales and the show. The convention was brought to a close that evening with a New England Seafood Bake at the nearby Dolphin Seafood Restaurant where attendees met to once again socialize, re-live this wonderful convention, and say their goodbye’s until next year.

Thank you again to the New England Chapter of The Gesneriad Society for hosting this memorable convention. Our convention in Framingham may be over, but wonderful memories will remain. In 2019 we hope to see old friends and new in downtown Cincinnati, Ohio, from July 2-6 at the Hilton Cincinnati Netherland Plaza Hotel as we gather for “Cincinnati Celebrates Gesneriads.”