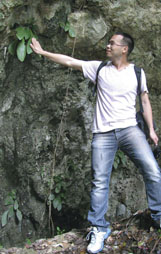 Dr. Wen is currently an associate professor, having received his doctoral degree in ornamental gardens from Beijing Forestry University in 2008. Dr. Wen has been involved in exploring plant systems, animal and plant coevolution, taxonomy and cooperative coevolution, as well as ornamental horticulture. He has published twenty papers in academic journals. Currently he teaches, hunts for plants, and manages the propagation house at the newly created Gesneriad Conservation Center of China. Dr. Wen has been responsible for leading numerous exploratory trips, and in the process exposing many other people to the wonder of the bio-diverse ecosystems of South China and Vietnam.

Vietnam is where Dr. Wen will be taking us with his presentation. He promises that numerous new gesneriads will be introduced to us during this program, not difficult to imagine with so much still being seen for the first time in this largely botanically unexplored country. He has no doubt that still more rare and beautiful taxa are yet to be discovered in this area. Dr. Wen points out that the center for Primulina stretches from South China through North Vietnam, with many species still new to science. What a deal, to be invited along on a gesneriad hunting trip into Vietnam!

We also will be very fortunate to have Dr. Wen report on the latest activities with the Gesneriad Conservation Center of China (GCCC) as part of this convention’s conservation meeting. This overview is an added bonus for having Dr. Wen as one of our speakers.

Marcela Mora: “Why Most Paradrymonia and Nautilocalyx Species Must Change Their Names” 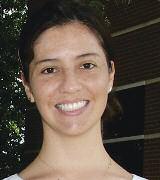 For Marcela, who grew up in Colombia, one of the world’s most bio-diverse countries, pursuing a career in biology seems very natural. Both her undergraduate studies and her graduate studies thus far have served to further encourage her interest in tropical botany. Before coming on board at the University of Alabama in 2007, in addition to her academics Marcela had contributed to systematics projects with the Araceae (the aroid family), working with the Missouri Botanical Garden and the Royal Botanical Garden. She has described new species in Araceae and Gesneriaceae in Colombia, Ecuador, and Peru.

Now under the direction of Dr. John L. Clark, Marcela is a doctoral candidate in the Ecology, Evolution and Systematics Program in the Department of Biological Sciences at the University of Alabama. Her research has focused on classification, evolution, and biogeography of the tribe Episcieae with emphasis on the genus Paradrymonia. As part of her dissertation she re-circumscribed Paradrymonia and resurrected the genera Centrosolenia and Trichodrymonia based on molecular and morphological data. On a different track she is also looking into some of the species relationships and possible new species in the genus Nautilocalyx. While the latter genus is more frequently seen in collections than the former, both genera are a bit more towards the less-often-grown end of the Neotropical genera for many growers. Hence, the title of Marcela’s talk will likely not stir up the major concerns it might with any of a half dozen more popularly grown genera. However both these genera include some exciting and dramatic species, images of which will be part of her presentation.

Marcela has received the Nellie D. Sleeth Scholarship from The Gesneriad Society as well as several different scholarships and travel grants from the University of Alabama for her dissertation research. Once her current research yields positive results, Marcela plans to continue her work within academia or with a research institution where she can pursue her passion as a tropical botanist and conservationist. In the meantime we are fortunate to have her share her research with us through this presentation. 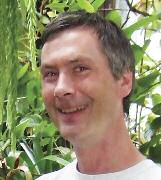 It is only appropriate that Michael returns to Nashville for this presentation, as our “small town” city is where Michael started his exploration of our favorite plant family. Michael put in several years as the plant recorder at Cheekwood Gardens and Fine Arts Center in Nashville before moving on to the same position at the Atlanta Botanical Garden. At ABG he has been able to start doing some part-time horticultural work as well. However, it was in Nashville with our local chapter that Michael started exploring the wild world of gesneriads.

While Michael readily admits that he is interested in many different plant groups, he also expresses the very accurate sense that, as for gesneriads, “The adventures in growing these amazing plants, coupled with understanding their role in nature as well as conservation concerns, is a combination that is irresistible.” Knowing already some of the incredible diversity present at ABG, this presentation is personally guaranteed to elicit “oohs” and “ahs” from those taking it in. 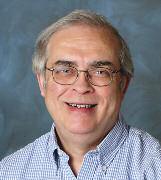 The name Mel Grice is well known throughout the gesneriad world, and is practically synonymous with the Society’s monthly e-zine “Gleanings.” In addition to being an editor for this publication, Mel also serves as editor for “Appraisal,” “Gesneriad News” for the Long Island, New York Chapter, and “The Violet Connection,” the magazine for the Ohio State African Violet Society. He serves as a Director of both The Gesneriad Society and AVSA, fulfilling several obligations associated with these positions. He is a Senior Judge for The Gesneriad Society and an Advanced Judge in AVSA. This is what he calls retirement after serving for 31 years as the Media Specialist and Librarian at a senior high school. Now, as he says, he has time to devote to his favorite plant family.

When he’s not editing, or presenting programs at any of the three African violet clubs of which he is a member, he’s growing and propagating these favorite plants of his. It is clear from his collection that he does both impressively well. His program will focus on various propagation techniques that he uses across a wide range of genera. While Mel is sharing his tips and suggestions, we’ll see many choice plants from his own collection, as well as others that he has photographed through the years.